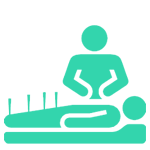 is an amazing procedure that fixes painful conditions in a way that nothing else can. For spinal conditions, often the tissues around the spine has become tight, full of painful trigger points along with a scar like tissue called fibrosis. Because of this, acupuncture is a wonderful addition to the chiropractic adjustment. Acupuncture helps to normalize the tissues around the spine so that the vertebra can function normally.

As a Chiropractor, Dr. Ehle utilizes acupuncture most often for the relief of pain. Headaches, pain in the muscles of the neck, shoulder, upper back, lower back, hips, knees, and almost any type of pain can respond to acupuncture.

The term “acupuncture” describes a family of procedures involving the stimulation of anatomical points on the body using a variety of techniques. The acupuncture technique, that has been most often studied scientifically, involves penetrating the skin with thin, solid, metallic needles that are manipulated by the fingers or by electrical stimulation.

Practiced in China and other Asian countries for thousands of years, acupuncture is one of the key components of Traditional Chinese Medicine (TCM). In TCM the body is seen as a delicate balance of two opposing and inseparable forces: yin and yang (a concept of opposing energies or polarity). Yin represents the cold, slow, or passive principle, while yang represents the hot, excited, or active principle. According to TCM, health is achieved by maintaining the body in a “balanced state”. Disease is due to an internal ‘imbalance’ of yin and yang. This imbalance leads to blockage in the flow of Qi (vital energy) along pathways known as meridians. Qi can be unblocked, according to TCM, by using acupuncture at certain points on the body that connect with these meridians. Meridians have 14 main channels connecting the body in a web-like interconnecting matrix of at least 2,000 acupuncture points.

Acupuncture became better known in the United States in 1971, when a New York Times reporter, James Reston, wrote about how doctors in China used needles to ease his pain after surgery. American practices of acupuncture incorporate medical traditions from China, Japan, Korea, and other countries. Due to Chiropractors focus on natural methods to restore health, until recently, they have been the primary source of acupuncture in Texas and the USA.